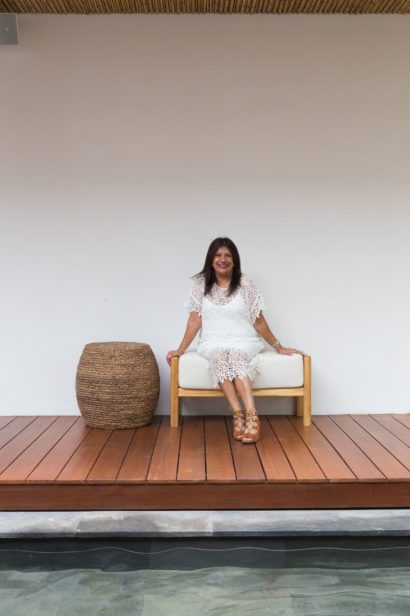 Ina Bajaj, the owner of the East Day Spa chain, was told she was terminally ill earlier this year and, true to her character, decided she would immediately build one of her most ambitious spa projects yet as a parting gift to the world. It was her biggest yet in both ambition and scale. “There’s a little island off Bali called Lembongan, which is about a 20-minute boat ride. I wanted to leave a legacy, and so I bought the most spectacular piece of land and we are going to be building our most ambitious project ever – it’s going to have a reflexology pavilion over the water, massage huts … I wanted to leave something for the world to be absolutely in awe of and I think this spa will do that.”

It turns out Bajaj will probably still be here when this new resort is expected to open in July next year – her prognosis has improved – and in any case, she already has quite the legacy, particularly in the sphere of the beauty industry in New Zealand.

In 2002, Bajaj left the restaurant she’d founded and run for 10 years, Wellington’s Curry Club, to found her first East Day Spa, also in the capital.

She credits her upbringing in Kenya for her constant desire to strike out in business.

“I think business was in my blood, taking risks, and actually just being fearless about life, and maybe that stems from my Kenyan background because, when you live in Kenya, you live on the edge, and having been brought up there in my younger days, you just learn how to take risks and seize the day,” she says.

Why did she go from hospitality to beauty? “Because restaurants are tiring and very, very anti-social,” she says.

While running the Curry Club, Bajaj used to travel to India frequently to recruit chefs and on her way back to New Zealand would stop in Asia, including Bali, and witness first-hand the spa offering. She decided Balinese-style spas would be unique in New Zealand, “and I haven’t looked back,” she says.

“In 2002, spas were like a domain for the rich and famous – it was not accessible to everybody but we wanted to make it somewhere that anyone could come,” she remembers. “In Wellington we had people from Weta or from the movies, right down to janitors from the railway station who would come, and you just want to make that hour or half an hour they’re with you so special.”

“How did I know it was going to be a success? What’s not to love about it? I mean I still walk into the space and it takes my breath away. And that’s what we wanted to offer.”

Pretty soon the business expanded into Auckland, into a partnership with Sky City Grand, and then Ina decided to take the business back to where she had been living part-time since 2006, Bali itself.

“People thought I was mad when I was opening in Bali,” she says.

“But having lived there since 2006, I’d looked at spa offerings and thought ‘you know you may say you’re the capital of spas but you’re not actually cutting the standard that is acceptable’ – outside of the major hotels that is.”

Bajaj says she thought “gosh, I could take this island on!” and set about establishing a spa next to one of the busiest spas in Bali but she says she was so confident of the brand she had no doubts.

“It wasn’t the deities or the flickering candles and incense – we were offering something very, very funky and new that Bali had not seen before.”

In this case, the spa was Bajaj’s second brand of spa, called Spring. It is a “social spa” where friends meet to chat around food and drink, and began as a service focused on feet. Now there are Spring Spas in Bali as well as Wellington and two in Auckland.

Overall, the business altogether turns over about $12.5 million and employs almost 300 people – with a further 200 people to be added in Bali in the next few years.

Getting the staff mix right is critical for a spa business, and it’s a constant preoccupation in both countries where her spas are operating. As for comparing the two business environments, operating in Indonesia is certainly not the easiest always, she says, but the New Zealand challenges are in some ways harder, and the margins are fewer.

“We’ve put a hold on New Zealand expansion at the moment because we’re just finding immigration laws and other compliances very, very expensive,” she says. “It’s not to say we won’t be expanding in New Zealand, we’re just sitting on our hands here, whereas in Asia we’re getting into aggressive expansion.”

One place the company doesn’t plan to expand into is Australia, says Bajaj, admitting frankly that a foray there in 2010/11 ended badly in a “million-dollar lesson – just as good as doing an MBA, really.”

It started when East Day Spa was shortlisted for a big resort project in Singapore. But after five gruelling days of negotiations Bajaj walked away. “As a business we were still in our teens; had it been now I think I would have had the tenacity to accept the challenge,” she says.

That mistake caused a chain reaction, which saw her offered a small space at a brand new Melbourne property if she wanted it and, not wanting to have returned from her travels “empty-handed” – she accepted without doing her homework and ended up with what she’s described as an impossible lease. “It was a disaster – I let ego get the better of me.”

But those days are behind her and, for now, expansion for East Day Spa and Spring Spa will focus closer to home, in and around Bali where Bajaj now spends most of the year, with an even greater focus on her 1000sq m legacy project in Lembongan.

“But for me, it’s not even the spa that’s the most wonderful thing about it – it’s the location – it is breathtaking,” she says. “Fingers crossed, it will be ready in July next year.”